When we stepped onto the NAB floor, our goals were pretty specific – find out the lowdown on the latest cameras directly from the sources. This post will discuss 3 brands; Canon, Sony and Panasonic.

First stop was the Canon booth. 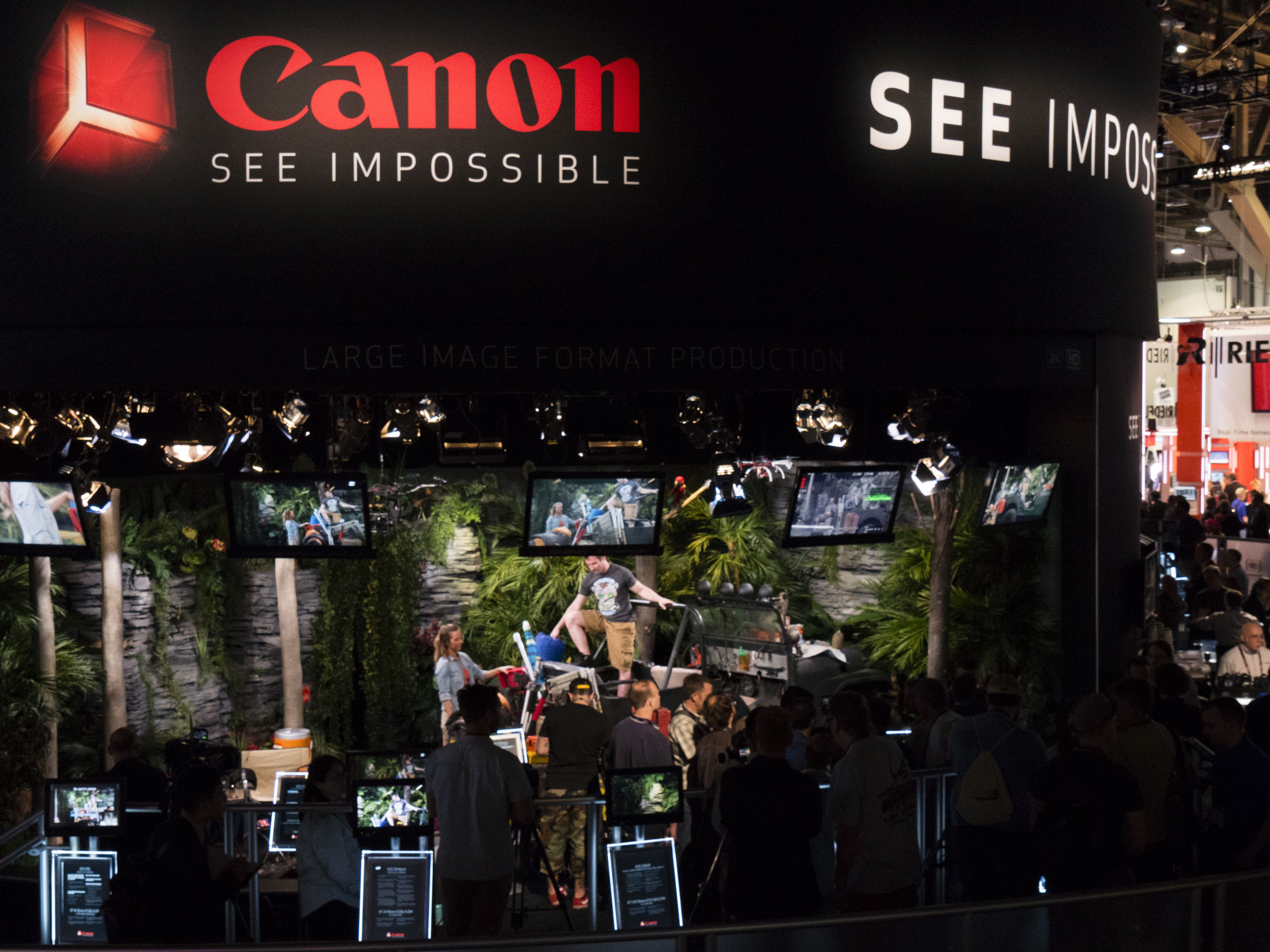 We knew that Canon was announcing a new camera, the C300 Mark II Cinema EOS Camcorder – a camera whose closest comparison would be the Sony FS7 (spec-wise). This was our main focus. Could we get anywhere near the camera itself? Not really, and on every check-back, the crowds continued to gather. Why?  The C300 had already made it’s mark in documentary TV, and with the introduction of 4K and larger bit rates (10 and 12 bit) – this could be their next great camera. The issue is going to be cost – at a starting price of $16,000 and the inability to shoot internal RAW 4K. Still has the convenience of an EF mount – but yes! There will be modifications available to allow EF or PL.  But <sigh> Another camera, another card – this camera uses the CFast cards, cost of around $500 for a 128G card. This camera should be available in September.

Canon’s Paul McAniff provided us with some links so you can see the camera at work, with various lenses. The colors this camera produces-are quite spectacular. Of course seeing the images on a Hi Res monitor – and not via the internet is going to give you the true image. But…take a look anyway:

Next stop was Sony.

We were pleasantly surprised to be met by one of Sony’s top engineers, Michael Kovacevich, who personally gave us a tour of Sony’s line-up. Before we even looked at a camera, we stopped in the monitor room – all we can say is WOW! The buzz word was “High Dynamic Range” – and we can only equate the first impression of seeing the vivid and sharpness these monitors produced, as that of seeing HD for the first time. With this level of monitor, there is no room for error – none. Just flawless.

Speaking of monitors – Wi-Fi monitoring capabilities was a hot topic. When we asked Michael about Sony’s features in this area he stopped, pulled out his phone and showed us the amount of wireless signals being used in the area – and gave us some insight on this trend. Hands down, this is one of the most unreliable forms of communication between devices…and one simple opening of a garage door by remote can shut down a shoot, as he witnessed on more than one occasion. (We saw this too while at NAB during a drone demonstration-as the monitors went black and the drone crashed…)

Thanks to having our guide – getting close to the Sony cameras was not an issue. Our first look at the Sony FS7 was inspiring. Knowing the popularity of this camera and seeing what it was producing, getting an up close look was fascinating.

Micheal concurred – the Sony FS7 XDCAM is the hot camera – and when we asked why, his answer was one word: “Affordability”.  We had previously blogged about this camera, defining the key specs and why the phenom – but like his simple answer. The camera has the price point allowing most owner-operators to get in the 4K game. Be aware though – if you are trying to use this camera in place of the F5, F55 (or F65), you will be hard-pressed to achieve the same cinematic quality. He equated putting a $39,000 lens on a $10,000 camera – to trying to put a Ferrari’s tires on a Toyota. The FS7 was not meant to be used with a higher end, cinematic lens. If you want to shoot that quality, you will have to upgrade to a upper-level camera. 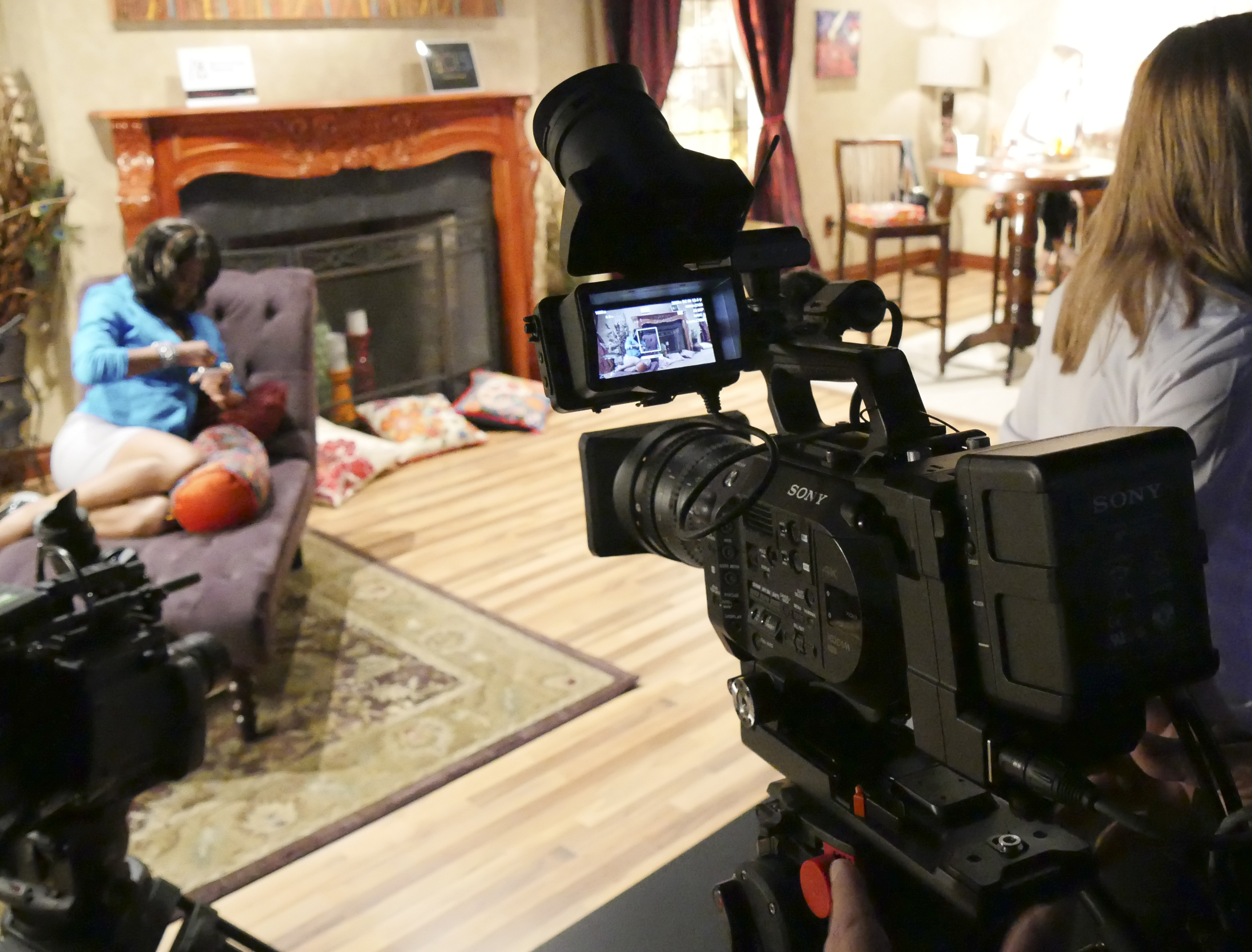 Truly the highest quality for EFP/ENG. You can trick these out, load them up and use whatever lens your shoot needs. The F65 is the flagship, intended for for cinematic applications, but it was so beautiful-we had to give it a mention and a nod. We don’t see this being used for our applications/clientele. However, the F5 ($20,000) and F55 ($35,000) are right on the mark – and would be friendly for 99% of our clients.

Sony understands the amount of rigging an EFP/ENG crew has to do. On their F55 model on the floor, they had a Documentary Dock for PMW-F5 / PMW-F55 Camcorder in place.  This basically sets up the F5 or F55 – to be as friendly as an XDCam for ENG.  ($8,000)

You can get an idea of what type of images the F55 & F65 produce by checking out features such as A Million Ways to Die in the West, Annie, The Wedding Ringer, Ted 2, and Tomorrowland. TV productions include Mike and Molly, Sons of Anarchy, Masters of Sex, and Battle Creek.

Yet another option to consider adding to your arsenal is the Panasonic GH4 4K Mirrorless Micro Four Thirds Digital Camera. This small, but powerful, digital camera is capable of capturing high-resolution JPEG and RAW stills, as well as UHD 4K 3840×2160 30p/24p and cinematic DCI 4K 4096×2160 video at 24p.  The system can also be switched to 24 Hz to capture true 24p in HD and 4K resolutions. Video recorded to SD cards is 4:2:0 8-bit. Real-time 4:2:2 8-bit and 4:2:2 10-bit video can also be sent to an external monitor or recorder with an optional micro HDMI cable.

In speaking with the Panasonic reps at NAB, we discovered that, at least in regards to this camera, they are more interested in putting out firmware upgrades that add features on a fairly regular basis rather than saving these improvements for the next model. Their plan is to keep the life of the current model going rather than constantly be pushing out a newer model (in other words, don’t expect to see GH5 in the next month!). As owners of a GH4, it was something that was nice to hear!

There you have it – some serious food for thought.