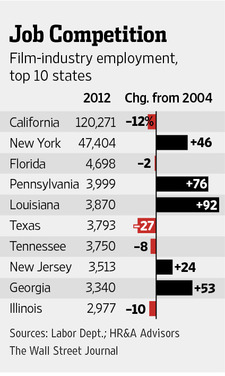 Greg Sproles, a muscular young man whose friends told him he looked like Arnold Schwarzenegger, quit his Orlando bartending job 12 years ago and moved to Hollywood to work in the moviemaking capital of the world. Much to his surprise, the work kept taking him back East.

Last January, he pulled up stakes and moved to a new filmmaking mecca: Atlanta. Since then, he has stood in as Will Ferrell’s body double on “Anchorman 2: The Legend Continues,” played a SWAT team member in the coming “Fast & Furious 7” and a peacekeeper in “The Hunger Games: Mockingjay—Part 1.”

As film and TV production scatters around the country, more workers like Mr. Sproles are packing up from California and moving to where the jobs are. Driving this exodus of lower-wage workers—stunt doubles, makeup artists, production assistants and others who keep movie sets humming—are successful efforts by a host of states to use tax incentives to poach production business from California.

The changing economics affect many major movies seen today. Only two movies with production budgets higher than $100 million filmed in Los Angeles in 2013, according to Film L.A. Inc., the city’s movie office. In 1997, the year “Titanic” was released, every big-budget film but one filmed at least partially in the city.

The number of feature-film production days in Los Angeles peaked in 1996 and fell by 50% through last year, according to Film L.A. Projects such as reality television and student films have picked up some of the slack. But overall entertainment-industry employment has slid. About 120,000 Californians worked in the industry in 2012, down from 136,000 in 2004, according to the U.S. Bureau of Labor Statistics.

The labor migration has arisen in part because California hasn’t competed aggressively on the tax-break front, officials and executives say, while states like Georgia have made efforts to grab a sizable chunk of the industry. More than 40 states and 30 foreign countries are offering increasingly generous and creative tax incentives to lure entertainment producers.

Timothy Bourne, a producer of “The Blind Side” and several other films shot in Georgia, says the right tax-incentive program can allow filmmakers to spend millions of dollars more on a production.

“The day you get a script, you look at what’s out there,” he says. The list of possibilities, he says, now usually includes Georgia, Louisiana, North Carolina and Rhode Island. The limited tax-credit program California adopted in 2009 isn’t generous enough to be competitive, he says. 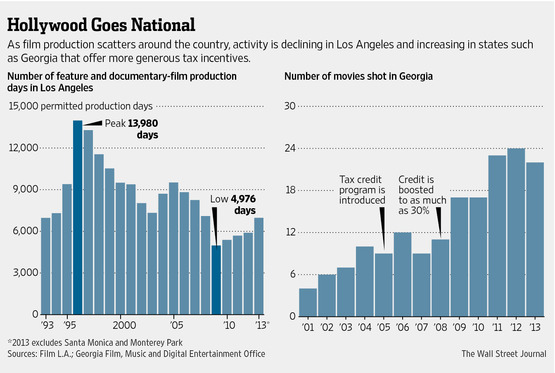 “If a company says, ‘We don’t want to spend more than $30 [million],” says Mr. Bourne, finding the right tax incentive means he can spend about $35 million but still fall within the budget. The extra money can pay for more days on set, he says.

Program terms vary from state to state. Generally incentives take the form of tax credits, which recipients can sell, effectively making them cash equivalents. Such incentives are controversial, and their popularity has ebbed and flowed. Proponents say they attract enough new business to offset their costs. Detractors consider them a costly giveaway to

a glamorous industry that hardly needs the help.

“It’s politically feasible and viable when you’re looking at it for job creation,” says Kevin Klowden, a managing economist at the Milken Institute think tank in Santa Monica and the author of a coming study on California employment in the entertainment industry. But the longer the programs are in place, “the real test is not how many productions are attracted, but how much local employment is growing and how the state can absorb new workers.”

In Georgia, under a nine-year-old law meant to attract new business, tax credits can cover 20% of what filmmakers and television producers spend on certain in-state production and postproduction expenses—from camera rentals and catering costs to paychecks for production assistants and A-list actors. Filmmakers can earn an additional 10% credit if they include a state logo in the credits. The credits don’t apply to preproduction work such as writing and location scouting or to marketing and promotional expenses. The incentives helped attract “The Hunger Games: Catching Fire,” filmed largely in Atlanta, partly at a convention center.

Georgia’s department of revenue doesn’t disclose tax credits awarded to individual productions, but other states do. To win “Batman vs. Superman,” a superhero epic slated for 2016 release, Michigan approved an incentive worth $35 million on $131 million of projected in-state expenses, the state film office said.California, too, offers credits, but they are more modest. The state’s theory is that the industry needs less incentive to stay in an area where crew members and production infrastructure are already in place.Even so, many in the industry argue the state’s program needs to be more generous to attract business back to California. Los Angeles officials are lobbying for state legislation to make the state’s program more appealing to producers. But the effort faces political headwinds because Gov. Jerry Brown has shown little support for it.When unveiling the state budget earlier this month, Mr. Brown said the state has “to be careful” when considering boosting incentives “because the desires are endless and they become needs very quickly.” He said he is “always resistant to spending more money than is in my budget.”

An incentive program in Massachusetts helped the state jump in 2011 to 11th place in film-production employment among the 50 states, from 18th in 2006. Over those five years, state employment in the sector increased by 46%, compared with only 3% nationwide, according to a study conducted for the Motion Picture Association of America, or MPAA.

Louisiana, which has been dubbed the “Hollywood of the South” for productions like the coming “Fantastic Four,” counted 7,866 direct and indirect jobs in film production in 2010. Two years later, it counted 14,011. The state treasury spent $168.2 million in 2012 for the film production portion of its tax-incentive program—a cost of $12,005 per job.

But the state says every entertainment-industry job backed by the program supported 1.4 jobs elsewhere in the economy. In 2012, the state registered more than $1 billion in film-related work in sectors such as real estate, construction and transportation.

New York’s incentive program helped boost the state’s share of nationwide movie-industry jobs to nearly 21% in 2012, from 16% in 2008, according to the state. In 2013, 183 productions took advantage of the program, more than tenfold the number that took advantage in 2004, when New York began its program.

Producers frequently cite Georgia as one of their top choices for filming. In 2005, the Georgia union representing behind-the-scenes workers, the International Alliance of Theatrical Stage Employees Local 479, had about 400 members. Today, it has more than 2,000.

Many of the movie industry’s lower-tier workers make a living jumping from set to set. Today, that means chasing jobs from state to state like an oil wildcatter.

Kristina Peterson moved to Atlanta from Los Angeles in 2011. She recently worked as an assistant director on “Last Vegas,” a CBS Films movie about a quartet of senior citizens who head to Sin City for a bachelor party. Parts of the film—even scenes set in a penthouse atop the Vegas Strip’s Aria hotel—were filmed in Atlanta.

“I’m under no illusions. I got that job because I’m local,” she says. “I saved them a big chunk of change.” The studio didn’t have to put her up in a hotel. She stayed in what she calls her “film flophouse”—a 4,000-square-foot residence she rents with three other movie-industry workers newly arrived from Louisiana and Los Angeles.

The industry’s geographical dispersal can make life difficult for workers. “I know a lot of people who will fly themselves [to Atlanta]” for temporary work, says Mike Rowe, a Los Angeles-based production coordinator who hires for films and television shoots across the country. “I had a Facebook ad out, and a lot of people were trying to fly and pay for their own hotel and their own travel just for a couple weeks of work.”

Andre Freitas, a special-effects makeup artist who works in Senoia, Ga., as a contractor on AMC’s “The Walking Dead,” says he used to field 25 to 30 resumes for work a year as the head of the Georgia-based AFX Studios Inc. special-effects firm. Now he sees that amount or more every month and has noticed longtime workers facing competition from new arrivals.

“It’s oversaturating the workforce for the people who have been here for a very long time,” he says.

The new productions have made it the busiest time in the history of the Georgia Film, Music and Digital Entertainment Office, a state department formed in 1973 when then-Governor Jimmy Carter wanted to capitalize on the river-rafting tourism brought to the region by the film “Deliverance.”

“It’s the reverse gold rush. It used to go out to California, and now it’s coming back,” says Jim Jacoby, chief executive of the Jacoby Group, a real-estate firm developing Atlanta Media Campus and Studios—100 acres of paint shops and sound stages across the street from a Cracker Barrel restaurant.

That kind of development has officials in Los Angeles worried. At a Hollywood Chamber of Commerce event in November, film and television executives complained that the state’s own limited tax program has put a stranglehold on local production.

New facilities now exist outside of California to handle large-scale productions requiring gargantuan spaces. Such productions are up for grabs in part because the California tax-credit program only applies to feature films with budgets of less than $75 million.

A coalition of California state and local officials is trying to raise that budgetary limit and increase the amount of state money allocated for tax incentives. California’s current program distributes $100 million a year across several projects, in the form of 20% to 25% tax credits. Programs must apply to the program and win a competitive lottery.

Years ago, Los Angeles City Hall had cameos in the “Adventures of Superman” and “Dragnet” television series. Mr. Garcetti says he is pushing to “reclaim a narrative” that was once synonymous with his city.

The mayor says a lobbying effort to garner public support for increased incentives will enlist industry workers who have had trouble finding work in Los Angeles.

Vincent Ferro, who moved from New York to North Hollywood several years ago to find work as a production assistant, would fit the bill. He says he had wanted to work in the movies since watching “Back to the Future” as a kid.

Jobs came slowly at first, he says, so he lived on savings he built up while earning six figures as a technician at the American Stock Exchange. Occasional gigs would pay $120 a day, the going rate for production assistants.

After a few solid stints on shows such as NBC’s “The Voice” and truTV’s “Top 20 Countdown: Most Shocking” videos, he says, he started to notice work drying up. The appeal of seeing celebrities on Sunset Boulevard faded when the economics came into focus.

Last week, he had 48 cents in his bank account and was relying on his girlfriend to cover expenses, he says. His calls to industry contacts have turned up nothing. All of them, he says, are now out of state.

He has started looking at apartments in New Orleans.